In Memory of Hubert L. Hunzeker

"Loved ones' lives are like a song...every note rare and precious."

This page has been created to honor the memory and celebrate the life of the late Hubert Hunzeker.

You may want to share memories or condolences or simply reflect on his life while listening to peaceful music. This is a time and a place to remember Hubert.

Please select music from the album below, as desired. The song "How Great Thou Art" is especially dedicated to his memory. 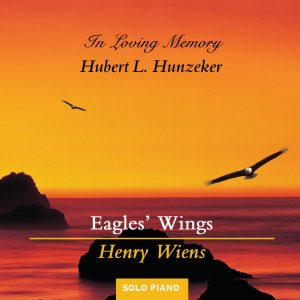 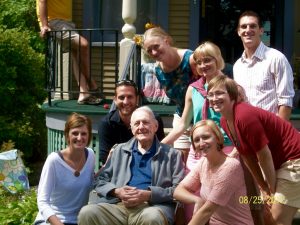 This memorial tribute has been provided by Lisa and Henry Wiens.

Lisa just received the following Facebook message from a former faculty member at Michigan Tech. Hubert was Chairman of the Mathematics Dept at the time. Dad made an amazing, brilliant transition to being a computer scientist – a self-taught expert. These were the early years when computer science was just coming into its own and he had to teach it! What follows was written by Dr. Robert Shelton.

“Hubert Hunzeker was an amazing human being. He was a mentor, role model, colleague and dear friend. We met when I got a second chance position in the math department at MTU. I was an immature kid with a gigantic chip on my shoulder, and in his quiet way, Hubert made me into a professional and better human being.

I was a blind mathematician who landed at Tech in the 80’s. I’d been promised a Braille printer by the department head, only to learn that there was almost no such thing anywhere, and certainly not at Tech. So, I remember Hubert walking to my office asking me about how Braille worked. I think he must have also checked out a book, because I don’t remember that many questions, and Braille is rather complex. Next thing I knew, maybe two weeks later, he dropped by and showed me a piece of printer paper with itty-bitty dots all over it. After a little inspection, I realized it was Braille.

There used to be a device called a Spinwriter (https://www.youtube.com/watch?v=tCCB0AW9yT4). It was something like a giant IBM Selectric typewriter, but meant to be driven by a computer. Hubert hacked the thing to make it write Braille by “sharpening” the period and fiddling with the impact so that it would make dents in the paper. Now Braille is basically dot patterns that bear little resemblance to the letters they represent. How he hacked the printer codes to produce actually quite good Braille is lost to time. He even improved on normal braille since I would be using it for computer programming. At the time, so-called computer Braille hadn’t been invented, so he invented it.

OK, this has run long, but no memory of Hubert is quite complete without mentioning his sense of humor. He was notorious for jokes, actually more like parables that usually contained some kernel of wisdom. As such, I never could retell them – ya hadta be there. But one day, and I swear I don’t know how it came up, but a few of us (all male) were discussing the occasional problem of forgetting to zip after a trip to the men’s room. Hubert seemed to think about it for a second and then said “Well Robert. Forgetting to zip is really not so bad. I’ll worry when I start forgetting to unzip.”  All my best, Robert Shelton 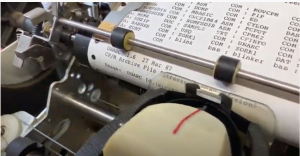 Here’s the joke that grandpa liked and complimented me for: “What’s dirty?” “A pig” “What’s more dirty than a pig?” “Pigs rolling in the mud.” It’s hard to see why it was even a joke, but now that I teach little kids, I get it. Anything with any punchline is a joke, when you’re learning jokes. 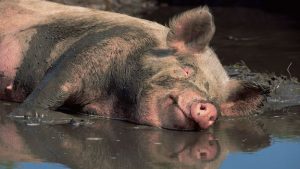 I have happy memories of being at Grammie and Grandpa’s house in Onalaska. I remember playing in the garage and outside, and the buckets of walnuts, and the lawn tractor. I remember visiting Lloyd’s farm and uncle Jim’s farm, so the smell of farm reminds me of the trips too. I remember the carpeted floor and air conditioning and G and G’s house, the heavy dishes, and getting presents like books and records. Grandpa seems like he was a fun and charming guy, full of jokes and clever information. I know he was very talented in math and played with the first computers that came out and designed a program. Grandpa liked ice cream and he said to me at 12 yrs old that you can’t trust people who don’t like ice cream 🙂 It’s a family story that he said I was funny and maybe I would be a comedian when I grew up? I’m sure he was humoring me, but it’s surprising how a compliment can stay with you! Love you grandpa Hubert, resting in peace.

Darla, thanks for sharing this one, I can still hear Hubert’s story-telling voice: “Did I ever tell you how I met your grandmother/mother/mother-in-law? It was at a dance and this beautiful young lady came up to me and asked “What’s the matter, mister, are you afraid to dance?””

Grandchildren! This may have been the time the adults practiced line dancing😂 I loved extended family gatherings. Dad seemed to enjoy it too, joining with teasing and laughter. I also remember him being protective of the furniture. Dorothy would bustle about making sure everyone got enough of what they wanted. I always admired how Dad and Mary took care of Mom at the end of her life. They had issues, but they worked them out. Back in Houghton he bought a big truck and a powerful snowblower to deal with hundreds of inches of snow, making sure we could get to school in the morning. He also picked up a couple of school mates on the way. His generous heart gave when the need was present. Such as standing up as best man in a younger man’s wedding (a vet with issues). As a professor he took extra time to encourage students in his classes. There is much more I could write about him! I love reading other memories people are sharing❣️ 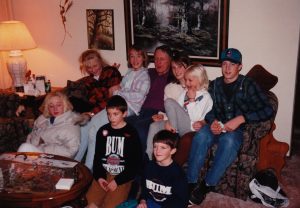 I have many fond memories of Hubert.
I remember him being so helpful in trying to name our children as they were being ready to be born. He thought everyone of them should be named Gus.

I remember when he babysat overnight and somehow the bowls fell out of the cupboard and a couple of them broke. I’m pretty sure one of the boys was climbing up there but Hubert said he thought that he had broken them.

He really enjoyed winning at Hearts and when he did, he jumped up and danced around his chair!

I remember when Dorothy’s health was failing and Hubert was there to care for her. He was so gentle and loving.

I remember when he and Gloria were moving to Onalaska and he asked if I would go shopping for some furniture with him. We were looking for a dining room table and a bedroom set for their new home. Needless to say, we drew some strange looks from the salesman (I was 8 months pregnant.)

I loved his many stories and/or remembrances! “Did I ever tell you how I met your grandmother/mother/mother-in-law? It was at a dance and this beautiful young lady came up to me and asked “What’s the matter, mister, are you afraid to dance?”” 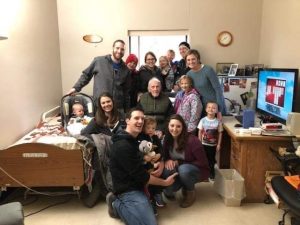 Beautiful memories so far. I didn’t know Grandpa taught some of us to stand on our heads! Hilarious. I also love hearing about his math smarts and intelligence. By the time I was a teenager, he still wanted to show me very “simple” computer games he created, and teenager me was not super impressed. Looking back I can see how much intelligence and hard work it actually took to create something like that. I wish I’d spent more time asking questions and listening to him. I remember the easy comfort of being in his home. It was warm, he was warm, and I felt happy and safe.

My grandpa could be very serious, but also very silly. He liked joking around with us kids and asking us serious questions like “What are you going to do when you grow up?” He suggested I get into the asphalt business; there was a lot of money in it. He loved to tell stories about my mom and how my mom met my dad.” He was a loving grandfather, who is missed. I wish he could see how his grandkids have grown, but I’m grateful he got to meet them a couple of years ago.

My grandfather was an important person in my life. He was always interested in my schooling as a child, especially in what I was doing in math class. He always encouraged me academically and expressed pride in my accomplishments. I am grateful for the many years he was in my life and still miss him.

Dad was brilliant and often talked math ideas way over my head after dinner. Even though I was a math major, I felt flattered that he evidently thought I could follow him. I would have never met Lisa if Dad hadn’t been concerned about me after I came into his office one day, assuring him I would win a talent contest (I did). I had also spoken dismissively of being a preacher’s kid and all that represented. He invited me home for dinner a few weeks later – ostensibly to help a friend notate a song she had written. That is “How I met your Mother”: Lora, Stephanie, Joanna and Carolyn – Lisa happened to be home that evening. She caught my attention very quickly with her outgoing beauty and truth be told – a miniskirt! During another visit, Dad took me aside, pulled out his Bible and read these verses to me: “May you be able to comprehend with all saints what is the breadth, and length, and depth, and height; and to know the love of Christ, which passeth knowledge, that you might be filled with all the fulness of God.” —Ephesians 3:18-19. Dad lived and died, resting in the assurance of that eternal love.

Nursing home visit. We are blessed that we had so many years with you, Dad. 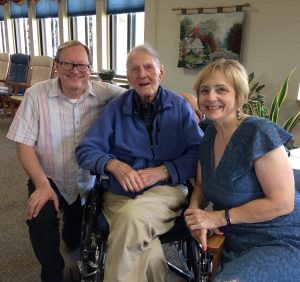 Dad, one of my best memories of you at about 75 is your showing granddaughters how to balance on their heads🤣 When I was a little girl and woke up with nightmares, you read the dictionary with me to calm down💕The photo was taken of our last visit with you at Assisted Living. We said good-by, then you walked us to the door and waved😥Love you, Dad, eternal. 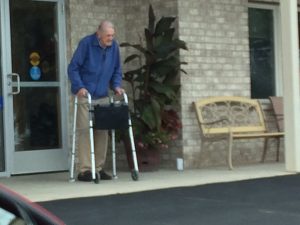